As inspiration for its Exquisite fall-winter 2022 campaign, the Italian luxury house Gucci looks to the films of director Stanley Kubrick. The images feature scenes from iconic movies such as “The Shining,” “2001: A Space Odyssey,” “Eyes Wide Shut”, and “A Clockwork Orange.”

Mert & Marcus are responsible for photographing the models that appear in the advertisements. Creative director Alessandro Michele is a fan of the groundbreaking filmmaker, and the designer noted that he often thinks of his collections in cinematic terms.

The ‘Exquisite’ campaign is my tribute to cinema and to one of its brightest maestros, Stanley Kubrick. A philosophic filmmaker who, better than others, emanated the magic of that inextricable knot through which cinema exudes life and magnifies it. I’ve always admired Kubrick’s remarkable capacity in tackling very different subjects. His experimental drive goes beyond any possible categorization.

In one image, a model appears alongside the famous twins of “The Shining,” wearing a lace top, a belted skirt, and brown boots. Another picture shows a model channeling a scene from 2001: A Space Odyssey while wearing a green gown with ruffles.

In a different photograph, the model is seen donning a coat made of faux fur, accessorized with multiple layers of jewelry, while posing next to mask figures from the film Eyes Wide Shut. Christopher Simmonds does art direction for the project, and Thomas De Kluyver and Paul Hanlon are responsible for the models’ hair and makeup, respectively. For more of the brand, check out the new Gucci Attache bags.

Replicas of the original costume designs curated by Milena Canonero and Charlotte Walter. 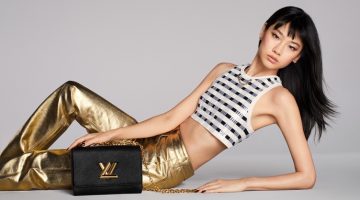 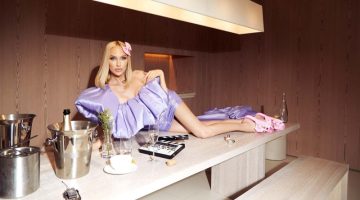