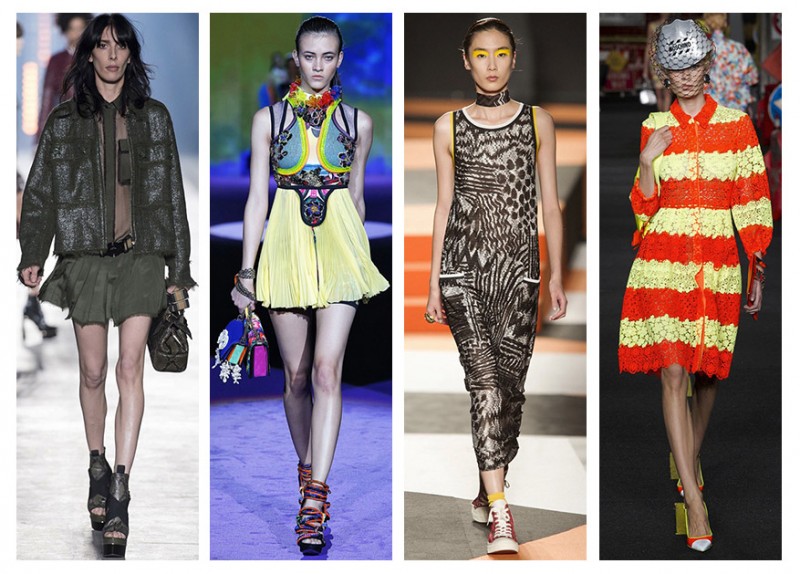 Following New York and London Fashion Week, Milan Fashion Week took the world of fashion by storm this month. From seafaring looks to wild animal prints, the designers at Italy’s fashion capital embraced unique trends for spring-summer 2016. Take a look at all four of them below.

The designers at Milan Fashion Week looked to nautical and seafaring looks for the spring 2016 season. From classic sailor stripes to imagery of oceanic life, everyone will be dressing for the sea life if these designers have anything to say about it. At Max Mara, models hit the runway with sailor inspired coats as well as illustrated shirts featuring lighthouses and boats.

By the Sea—Emilio Pucci’s Massimo Giorgetti‬ sent out a collection made for an “urban mermaid” complete with 3D textiles featuring netting and fish. Bags adorned with fringe also tied into a free-spirited vibe.

By the Sea—Giorgio Armani took a less literal approach to nautical fashions with light layering and a soothing color palette for his spring 2016 presentation.

By the Sea–At DSquared2, Dean and Dan Caten dressed their island girls in tropical styles including scuba style separates in neoprene for the ultimate water babe look.

New York Fashion Week may have brought us plenty of stripe print, but at Milan, designers took on their own unique spin on the trend. From sequins to metallics to fringe, stripes are in for spring 2016. At Prada, stripes took over much of the mod-inspired collection with boxy silhouettes and shimmering touches.

Unexpected Stripes–Stripes were a rare sight in Alessandro Michele’s spring 2016 showing for Gucci but when they did appear, they were big and bold or even curved for a trippy effect.

Unexpected Stripes—Moschino’s Jeremy Scott embraced color with a collection inspired by caution signs and construction sites. With this theme in mind, orange and yellow had a major moments on the runway. Stripes in lace gave a ladylike yet unexpected take on the trend.

Unexpected Stripes—Alberta Ferretti’s bohemian glam collection included her own version of stripes in natural occurring colors for an understated yet refined look.