Another trend that designers took on whole-heartedly for fall 2015 was fringe. Whether looking for a southwestern influence like Ralph Lauren, or more art deco inspired, look out for frayed styles in autumn.

Fringe Accents–Joseph Altuzarra was another designer who found a love of fringe for fall. His 1970s inspired collection oozed of sex appeal with glittering dresses decorated with fringe accents and featuring high slits.

Fringe Accents–Inspired by expressionism art of the 20th century, Proenza Schouler designers Jack McCollough and Lazaro Hernandez went for a bold silhouette and color palette for fall 2015. These fringe-embellished looks brought an Amazon warrior vibe to the runway.

Some designers got dark on the catwalk with rock and roll inspired looks. Case in point, Alexander Wang debuted a mostly black goth collection that was not afraid of some plaid as well as bold grommet accessories.

Goth Glam–At rag & bone, Marcus Wainwright and David Neville looked toward 90s hip-hop style for inspiration, but that did not stop the designers from bringing a goth spin to a few of their looks.

Goth Glam–The Vera Wang woman covered up in slouchy shapes for the fall-winter 2015 season wearing a wardrobe in all black. Cocoon shapes and crop tops give a modern goth look to the new collection. 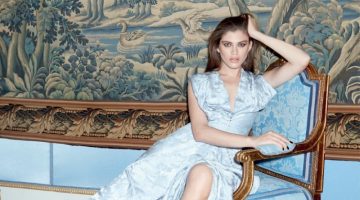